Last Friday (11/02) the server was upgraded to Slackware 15.0. The upgrade of the system itself took about an hour, but it was necessary to re-configure and fix problems with many services. It was also necessary to upgrade to MySQL 8.0, because MySQL 5.7 would simply not start (as existing packages are build for older Slackware versions with old libraries). Due to strange error (manifesting itself as ListUtil.c: loadable library and perl binaries are mismatched (got handshake key 0xdb00080, needed 0xeb00080) when perl or cpan commands are run), all Perl modules had to be reinstalled. In addition to this there was also a boot problem.

Thus the server was completely or partially inaccessible from about 2022-02-11 17:50 EEST to 2022-02-12 03:00 EEST, but on the next day and the day after more problems with public and private services were tackled. Some more problems with hosted applications and sites were fixed as well.

Both Slackware 15.0 and MySQL 8.0 were much needed upgrades and I'm happy to be running both now.

Just about an hour ago finished the replacement of a potentially failing disk drive on the server. Unfortunately, this affected the mirrors, because their partition was on the drive without a backup. So mirrors were unavailable between about 2021-09-27 20:06 EEST and about 2021-09-28 05:41 EEST. Sorry for that, but the replacement was necessary to prevent the consequences of imminent drive failure.

The new drive is 4 times the size of the previous one, so eventually more mirrors and/or other content may come soon. The mirrors of GNU and Slackware are available again now and up to sync, so happy downloading!

I was considering dropping support for TLS v1.0 and v1.1 protocols for the hosted web sites since 2016, when it was suggested, but I was still seeing such clients in the logs (and unfortunately I still do even today). I was thus reluctant, because such clients would NOT be able to access the sites anymore. However, we are 2021 now and there are no excuses for using too old and insecure clients (i.e. browsers).

Therefore, since about 12:00 UTC today the hosted sites are no longer supporting TLS v1.0 and v1.1 clients. I also disabled weaker ciphers like CBC. This effectively cuts the following browsers as SSL Labs' report shows:

If you are still using any of these apart from testing purposes in isolated environments (like me), then too bad for you. It is really time to upgrade!

This is considered a necessary step for improving web sites security and something that perhaps should have been done earlier. The changes were done following Mozilla's Server Side TLS recommendations. It is not possible to enable TLS v1.3 for now, because this requires OpenSSL 1.1.1 or later, which would become available with Slackware 15.0 hopefully later this year.

Today, I finally managed to upgrade the Internet connection. The server is now connected through a high speed GPON network provided by Vivacom with maximum (unwarranted) upload speed of 300 Mb/s from the whole world. This is three times higher than the previous capacity and seems more relevant nowadays. The new connection should make the access to my content and the mirrors faster and more reliable.

Unfortunately, due to change of the service, I had to change also the IP address (it is now 46.10.161.161), which caused some unexpected unavailability, but for not more than 5-10 minutes as the DNS servers updated quickly.

Today, between 18:40 and 20:00 EEST the server was not accessible, because I was finally able to move the system to the new machine (Dell PowerEdge R340). The operation took so long, because I wanted to copy the bootable SSD disk to the new drive that came with the server, but I was not able to install it - a special bracket is required to fit 2.5'' SSDs into Dell's 14th generation 3.5'' carriers.

After I moved all the drives I got myself into cabling, which took me some more time although my new rack is well organized. I first chose patch cables with the wrong length and then I had to reorganize some existing cables, so I could fit around the new ones.

The first boot was smooth as expected with the default kernel, but I forgot to comment out the persistent interface rules of udev for the network adapters of the previous machine, so the server was without network. After fixing it I decided to reboot once again to test that everything would get up properly.

I had to tune several other things after the server was up, but nothing that would disrupt its normal work. The server is now ready to serve its purpose. 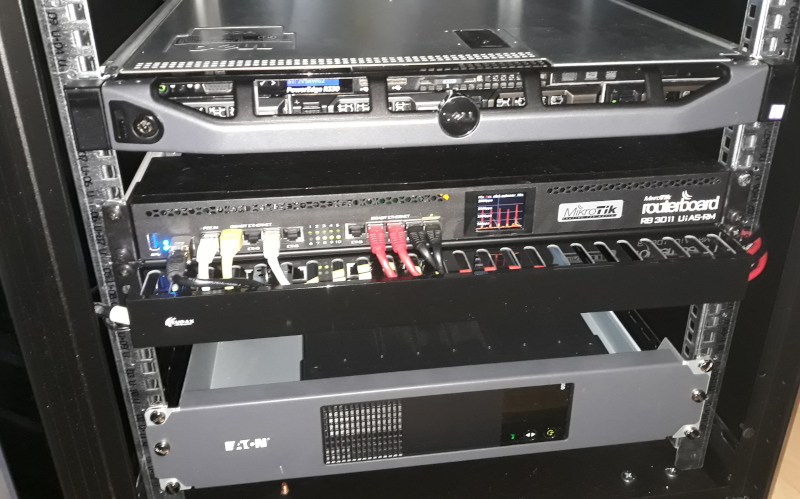 An hour ago I upgraded the memory of the server to 16 GB. And the server was not accessible for half an hour between 19:30 and 20:00 EEST, because I accidentally loose the SATA connector of one of the hard drives :-(

After I added a new 8 GB DDR3 module the server started normally. I thought everything is OK and left it, but then I tried to connect and wasn't able. So, I went back to check the server and on the console there were many EXT4 error messages. I had to stop the machine again, check the devices in BIOS. Since one of the hard drives was missing I immediately checked the connectors and solved the problem.

I should have done this upgrade long ago, but until recently I though the memory is enough for all the services running. Anyway, the server has enough memory now.

Inaccessibility due to router replacement

Today between 12:30 EET and 14:30 EET the server was not accessible due to router replacement and change of IP addresses. Although, the replacement was planned and prepared previously, some unforeseen circumstances occurred with the configuration of the device itself as well as with the server.

The expected change with the replacement is better network performance for the increasing outer and inner traffic.

Last night while all students were celebrating, I spent replacing a failing Samsung 830 SSD on the server. The disk was so rotten that it's copy with dd took about 5 hours, which is why the server was offline somewhere between 2017-12-08 22:00 EET and 2017-12-09 05:00 EET. The disk started failing in beginning of September, but recently the number of reallocated sectors become extremely high and I started detecting bad sectors on some system files. The read performance had also dropped and during the copy it fell to 5 MB/s (!), which explains the fore mentioned slow copy of just 64 GB between the old and new SSD. The disk failed only after about 24 000 power on hours (i.e. about 2 years and 9 months), which is rather strange, but maybe this is the normal life span of consumer SSDs?

Anyway, the drive is now replaced with a brand new ADATA SU800 128 GB, which unfortunately is not yet in smartctl database (see ticket 954). The server is back online and fully operational.

Last Sunday (28/08) the server was upgraded to Slackware 14.2, which itself passed flawlessly, but then there was a need for re-install of all the additionally used Perl modules and upgrade of some packages (e.g. OpenLDAP, RRDTool and FreeRadius), which I haven't upgraded/rebuilt yet.

Yesterday, evening the datbase server was also upgraded to MySQL 5.7.13, so it now remains only to upgrade the kernel to a LTS version from 4.4 series.